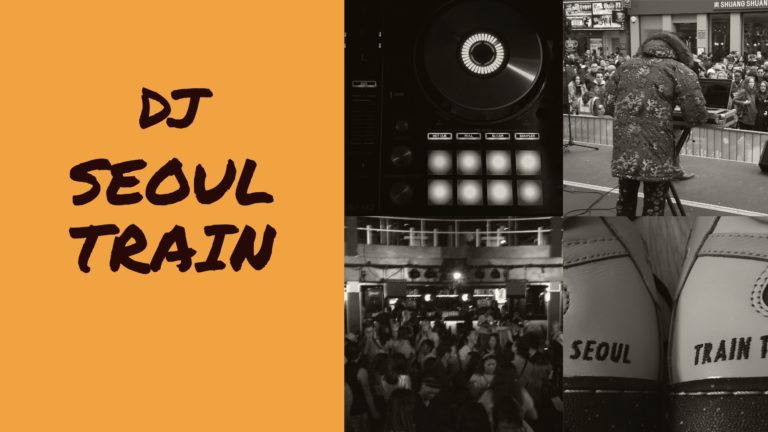 Seoul Train is a Korean adoptee raised in the Netherlands and now based in London. He is a self-producing artist, DJ, pianist and percussionist. His new Lockdown EP, denouncing the ongoing attacks on and racism against fellow Asians, is out now exclusively on SoundCloud.

Seoul Train is a Korean adoptee raised in the Netherlands and now based in London. He is a self-producing artist, DJ, pianist and percussionist. His new Lockdown EP, denouncing the ongoing attacks on and racism against fellow Asians, is out now exclusively on SoundCloud.

Formerly known as Shogun, he is most well-known for his work with the band TrackAddicts. With this band, in which he played keys, rapped and (co-)produced, he recorded two albums, toured the Netherlands and played in France and Romania (B’estival 2007). The band was signed to George Clinton’s CMG/WeFunk Records and Seoul Train eventually worked with George Clinton and Parliament Funkadelic themselves.
As a solo artist, he opened for Jeru da Damaja and shared stage with Wu-Tang Clan, Bilal, DITC and others.
As a producer, he worked with Dutch Hip-Hop legends E1-Ten, Brainpower, Maikal X, Nicotine and numerous upcoming artists in the US and UK.

Born Jun Seok Kim, Seoul Train is a Korean adoptee raised in the Netherlands and now based in London. He is a self-produced artist, DJ, pianist and percussionist. His new Lockdown EP, denouncing the ongoing attacks on and racism against fellow Asians, is out now exclusively on SoundCloud.

Seoul Train played his first note on the piano when he was six. He knew then that music would play an important role in his life. He received Classical training until he was twelve and moved on to Jazz / Improv. He discovered Hip-Hop early on and felt an instant connection and drive. From Tribe to Wu-Tang to UGK, he took it all in like a sponge. He was inspired by the variety of styles and growing up he felt he could relate to what they rapped about. When he was seventeen he debuted as an MC on the big stage of the Racism Beat It festival near Amsterdam. Then in 1997, during a student exchange to Canada, Seoul Train recorded his first demo tape with the Bomb Shelta Association out of Toronto. He also learned how to DJ, a skill that would come in handy later.

After seeing a live Hip-Hop band play at a festival something clicked and Seoul Train thought it would be cool to combine playing keys with his love for Hip-Hop and MC’ing. So when he was asked to join the band TrackAddicts in 2001 he did not hesitate. The musicians turned out to be the band that was playing that day!

TrackAddicts turned out to be a national success. The band spent several years on the road and recorded two albums: “Handgrenades and Butter” and “RockstarFunk.” Later, a collection of songs from both albums was released in the U.S. by WeFunk Records. TrackAddicts went on to play almost every festival and venue in the Netherlands and beyond, ranging from playing with the Holland Symfonia orchestra to B’estival in Romania. It was during this time that Seoul Train produced his first track: “If I would be…” was subsequently picked up by MTV Europe to promote the VMAs with the Dress Like A Star competition.

Seoul Train, using the MC moniker Shogun at the time, released the “Shogun War Chant” double A-side single on 12” vinyl in 2003. Well received by the press he then opened for Jeru Damaja and later shared stage with Wu-Tang Clan, Bilal and DITC. As part of a cultural Hip-Hop exchange with the Czech Republic he took part in the “From Amsterdam to Praha” project, appearing on three tracks on the album and in the documentary film.

In 2004, after a TrackAddicts show, the resident DJ had forgotten his crates and Seoul Train rocked his first crowd with just a laptop, a collection of MP3s and a copy of Traktor. Soon after, he was asked to play a number of events for the Dutch Basketball Association NBBB alongside members of Dutch R&B group Dignity.

In 2008 the band split up, and Seoul Train worked with a number of Dutch and U.S. artists until moving to the UK with his wife in 2011 to study and work there. During his studies he picked up DJ’ing again and started a journey to rediscover his Korean heritage. He had also reunited with his Korean family by then. He became a specialist in Korean Hip-Hop and R&B and started playing high profile events in the Netherlands and in and around the UK, including London Fashion Week and the Changwon K-Pop World Festival in Dublin. In light of this pivot in his career, he decided to make Seoul Train his MC name as well.

Next to producing, writing and studying for a second Master’s degree in Ethnomusicology at SOAS, Seoul Train started private tutoring and providing consultancy in 2016. Since then he has helped build and tune OnDaBeat Studio in West London and was responsible for two remixes for Dutch Hip-Hop legend E1-Ten. But the outbreak of the corona virus in China and more exposure of racism against East Asians triggered something more in him. After “Yellow Peril”, he is revisiting this topic with his upcoming single “Break The Silence”.